Being a child in Bangladesh

I travelled with UNICEF Italia and UNICEF Bangladesh to collect stories of children and adolescents in Bangladesh: with nearly 150 million (68 millions of which are children) inhabitants on a landmass of 147,570 km, it is among the most densely populated countries in the world. Around 47 million people live below the poverty line. 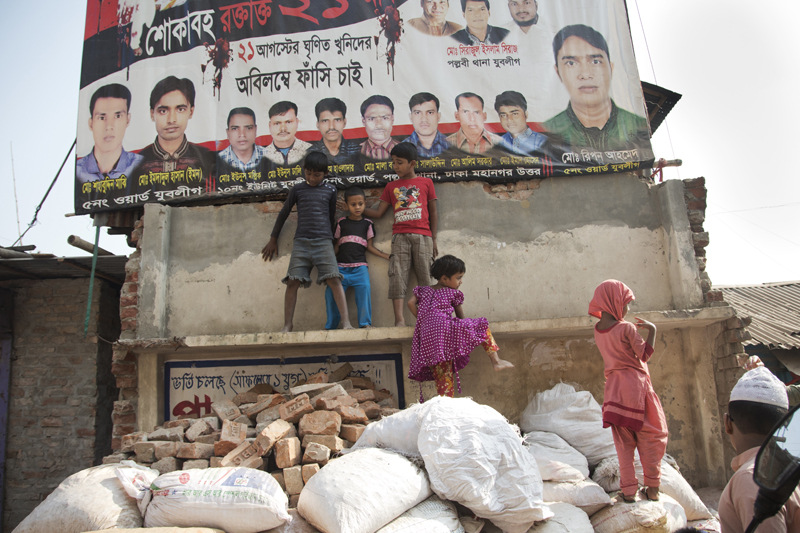 Mirpur slum, Dhaka. The most vulnerable children are the ones living in the streets, more easily exposed to abuse and exploitation,
they grow up marginalised. One out of 4 children of age of being in primary school has no access to education. 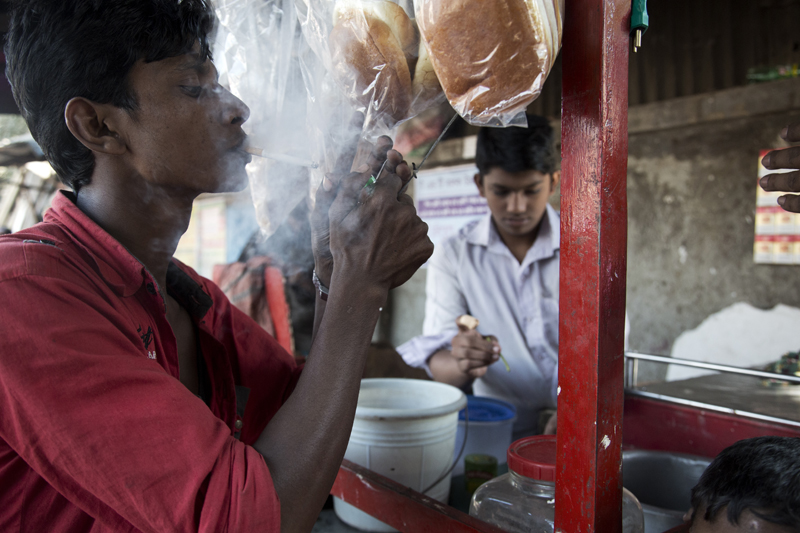 Korail Slum, Dhaka. UNICEF provides cash transfers to eligible children, whether to keep them in school or to develop small businesses,
like coffee shops or sandwich stands in the slums. Korail slum has 600.000 inhabitants. 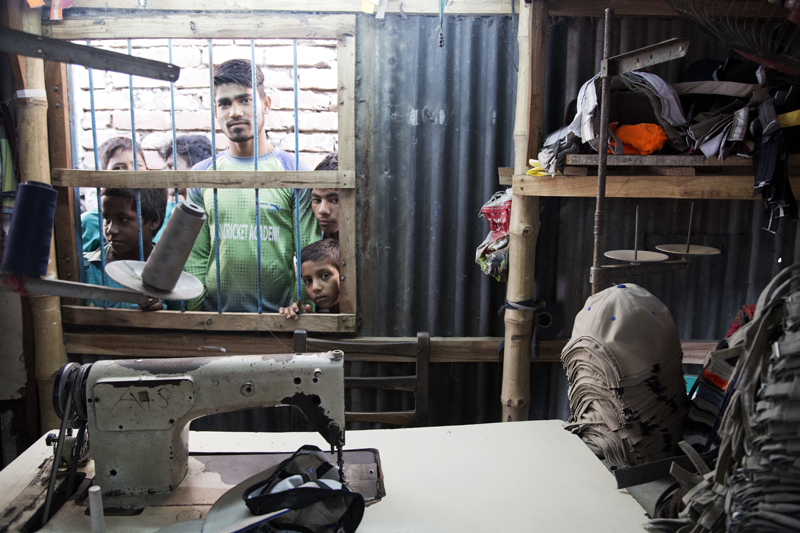 Mirpur slum, Dhaka. A hat and caps factory. Six percent of children aged between 10 and 14 are (1 million children) engaged in labour. 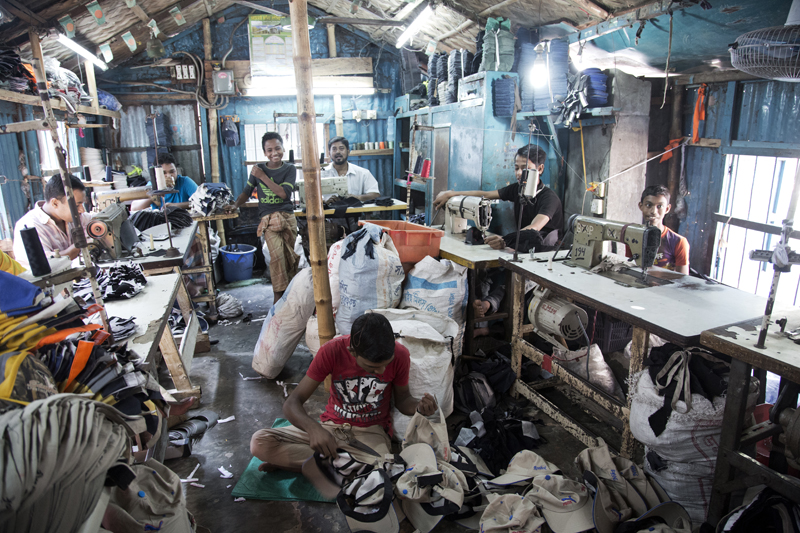 Mirpur slum, Dhaka. Child labour exists in the whole country but is more frequent in Dhaka.
41% of the children are engaged in the service sector, whilst 39% in agriculture. 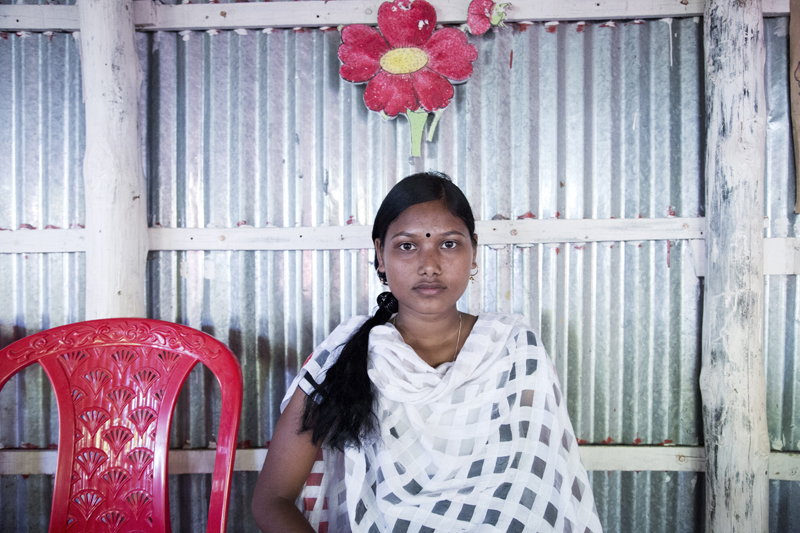 Sutaerkhali, Dacope Upazilla. Chandra Shil is 17. She comes from a poor family that couldn’t afford to sustain her, a few years back they therefore decided to give her in marriage to a man, 27, from another village. After months of struggling, including having to threaten her father saying child marriage was against the law, she managed for the wedding to be called off. She is now back in school. 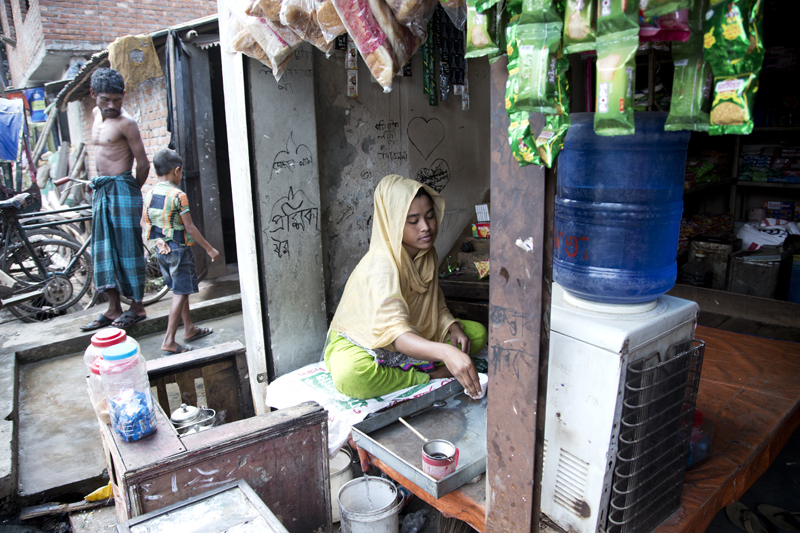 Mirpur slum, Dhaka. Nilpi, 17, preparing a tea th the coffeeshop where she works. 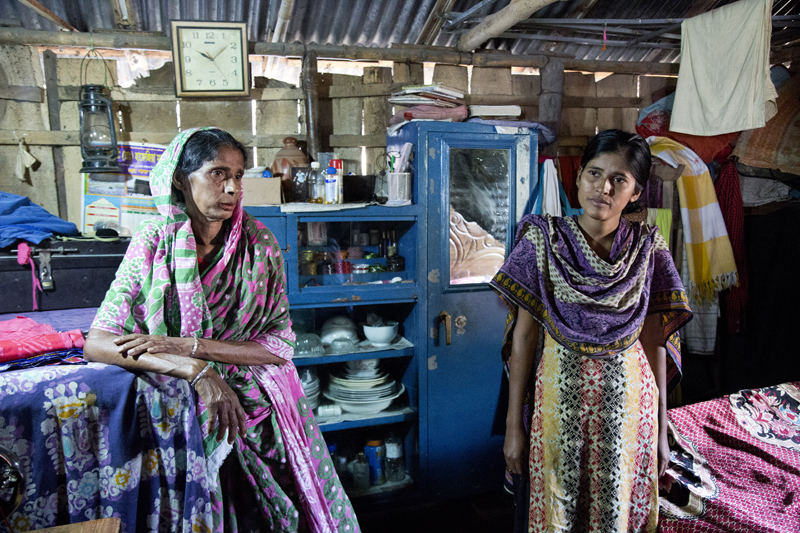 Khulna. Shilpi’s father is sick, he needs 500 takas per month for medicines, she earns 200 sewing. She has two sisters, married as children,
but now her mother realizes it was a mistake, and she will protect her. Shilpi is now 16 years old. 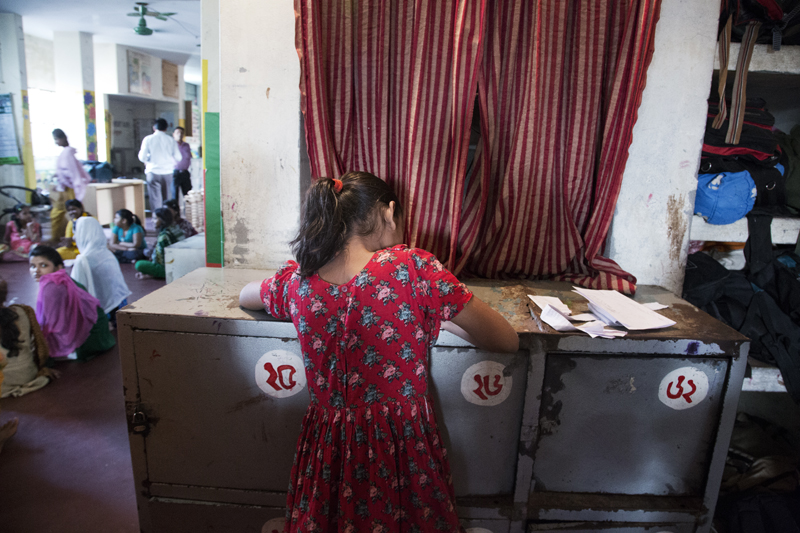 Old Dhaka. There is a Girls’ Drop In Centre in Dhaka, where girls can be dropped by their parents, or they are found by the volunteers.
About 100 girls live in the apartment at the moment, they all sleep on the floor, but they are provided regular meals and education. 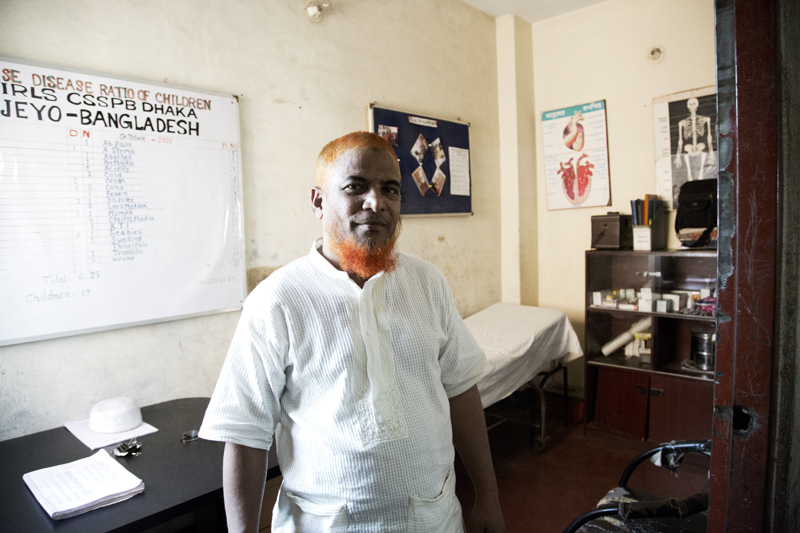 Old Dhaka. There is also a nurse at the Drop In Centre, with a small cupboard for medicines, and a billboard to track this month’s diseases. 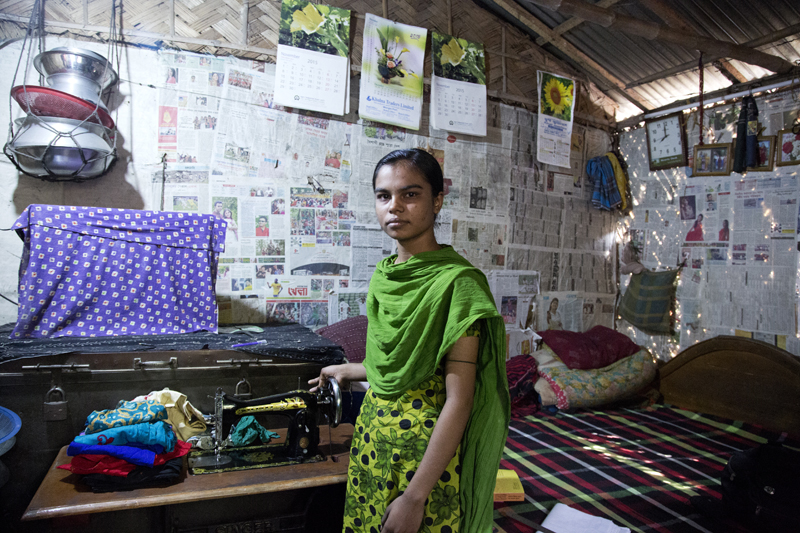 Khulna. Shurma K. is 16, she was eligible to receive the cash transfer from UNICEF, with which she was able to buy the sewing machine.
She now manages to pay for her textbooks selling clothes she makes. She has two sisters, one of them was married at 15 and now has a disabled son. 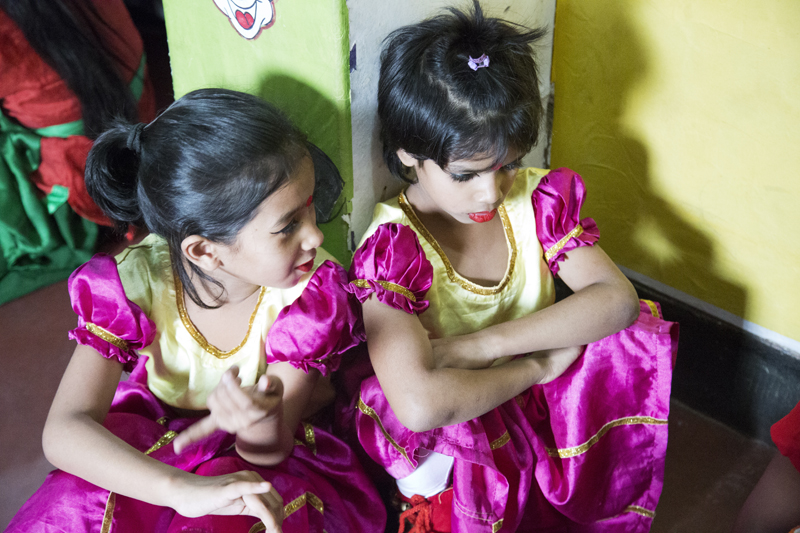 Old Dhaka. Fatima, right, lives in the Girls’ Drop In Centre. She says she is 9, some say she is 6, no one can know for sure. Her mother died giving birth to her, her father begged with Fatima in his arms for years, until he abandoned her at the Centre. When she grows up, she wants to be Superman. 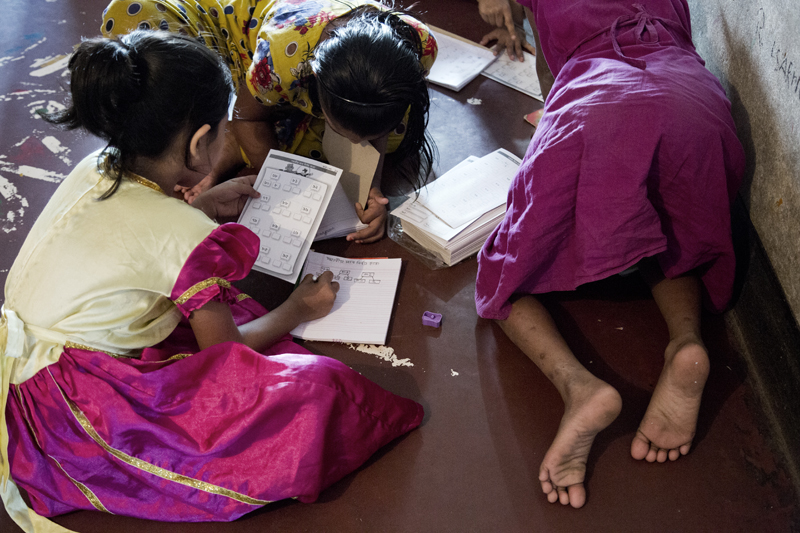 Girls studying at the Girls’ Drop In Centre in Old Dhaka. 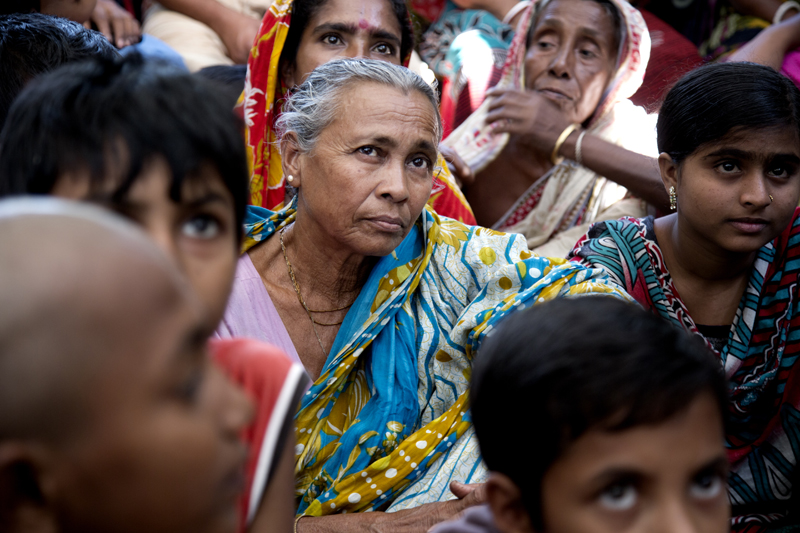 Dhubati. A woman watching the Swim Safe demonstration. Drowning is one of the first causes of child mortality in the Khulna region:
UNICEF, together with the government and local NGOs, teaches children and adolescents how to swim and to rescue a drowning peer. 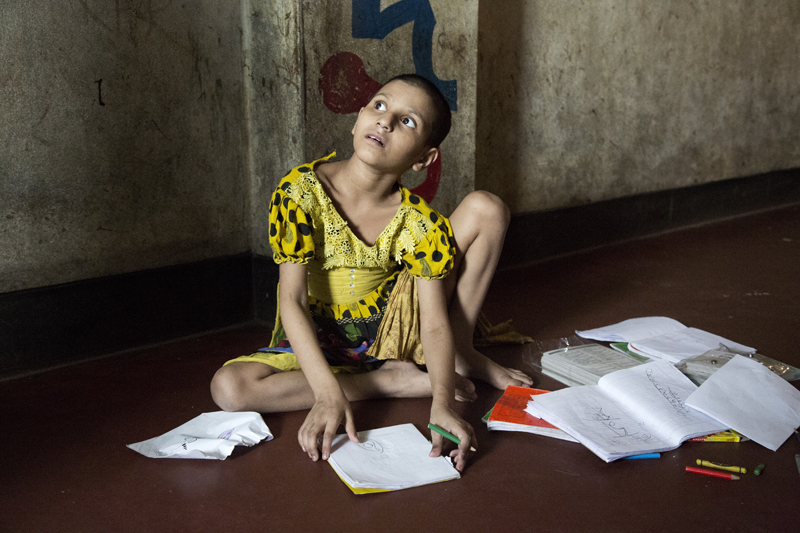 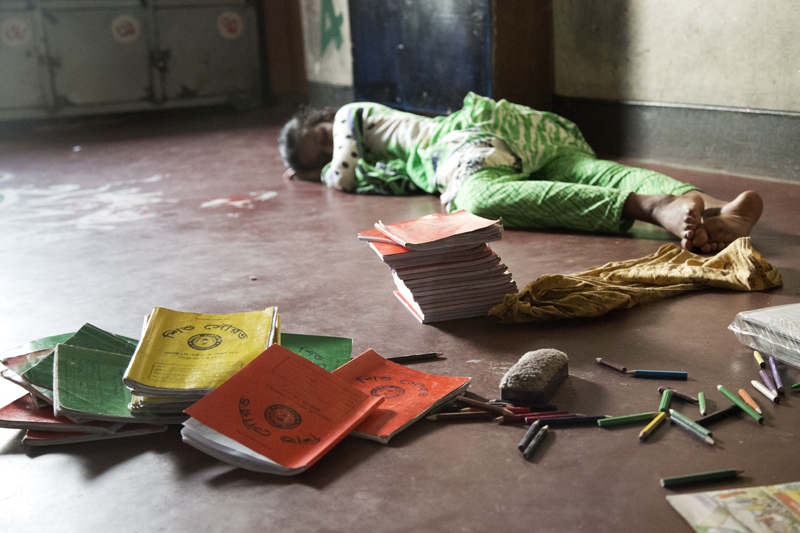 A girl sleeping at the Girls’ Drop In Centre in Old Dhaka.