In Praia, the capital of Cape Verde, the reality of the working class neighbourhoods clashes with the postcard image that all-inclusive hotels offer to tourists.

And the country seems to be on the shoulders of women, that were forced to become the stronger sex. 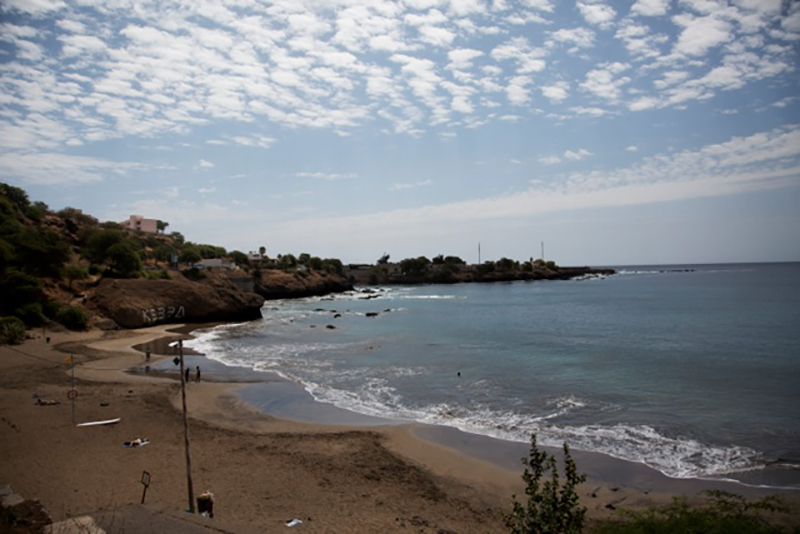 Praia is the capital of Cape Verde, a country of 500.000 inhabitants, scattered on an archipelago of nine islands off the cost of Senegal. 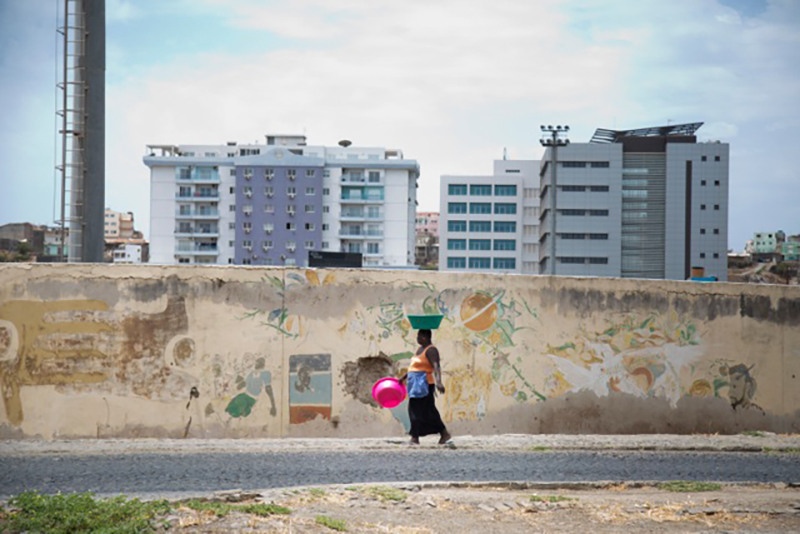 Praia. A woman walking away from the market with her empty baskets. 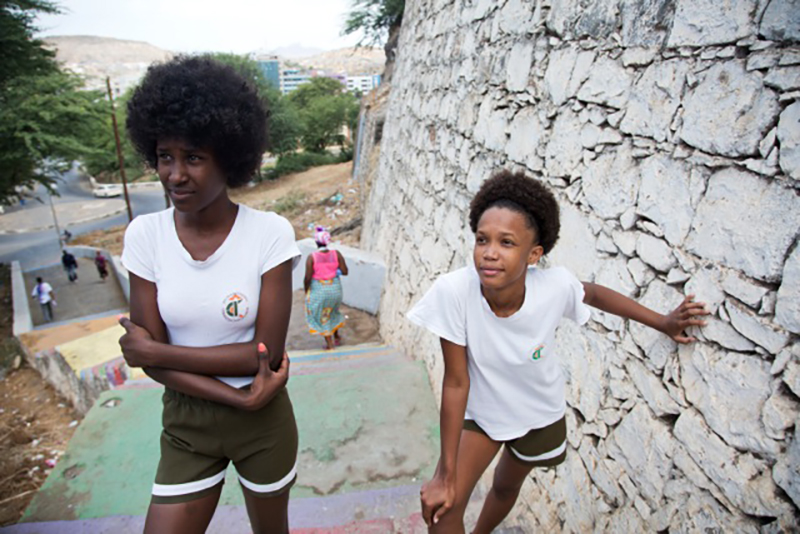 Praia. Vanessa, a high school student of 16, has a dream: to move abroad. Here, families are often made of a single parent with a lot
of children, women have babies very young. Fault of the tradition, in a country made out at 90% of Catholics, but also of an
old superstition that says the youngest the mother, the purest the blood of the child 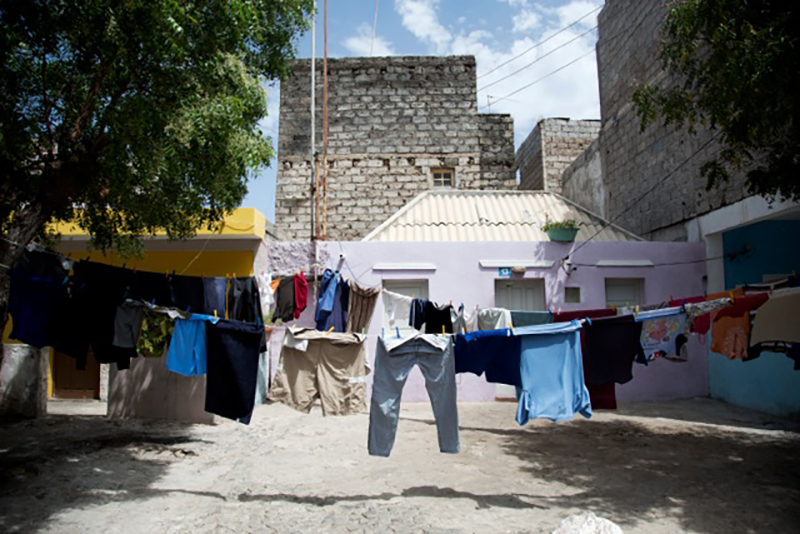 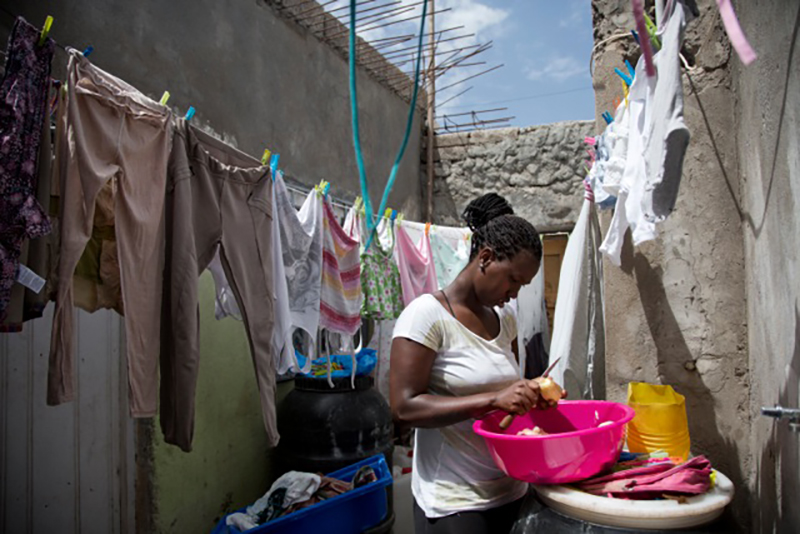 Praia, Brazil neighbourhood. One of the sisters of Carmencita came to help her prepare the lunch for the neighbours. 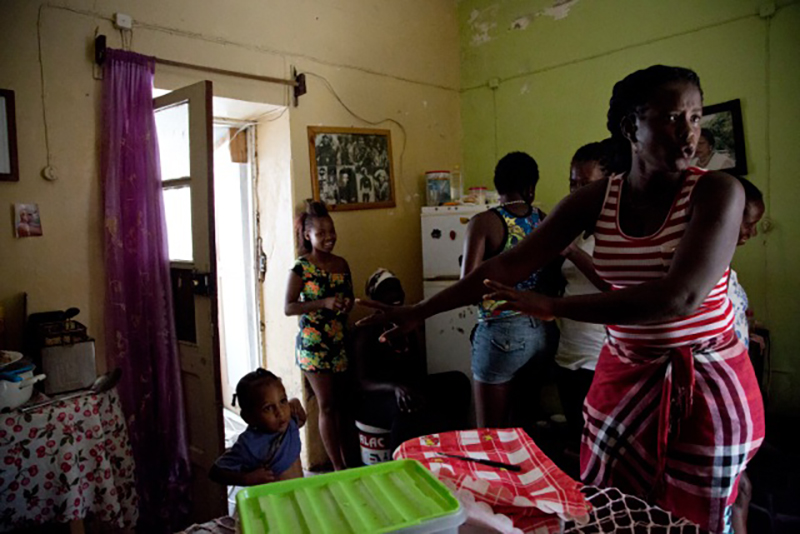 Praia, Brazil neighbourhood. Sisters and cousins of Carmencita discussing cooking matters: the tradition wants the widow to prepare
lunches and dinners for her neighbours in exchange of a few escudos. 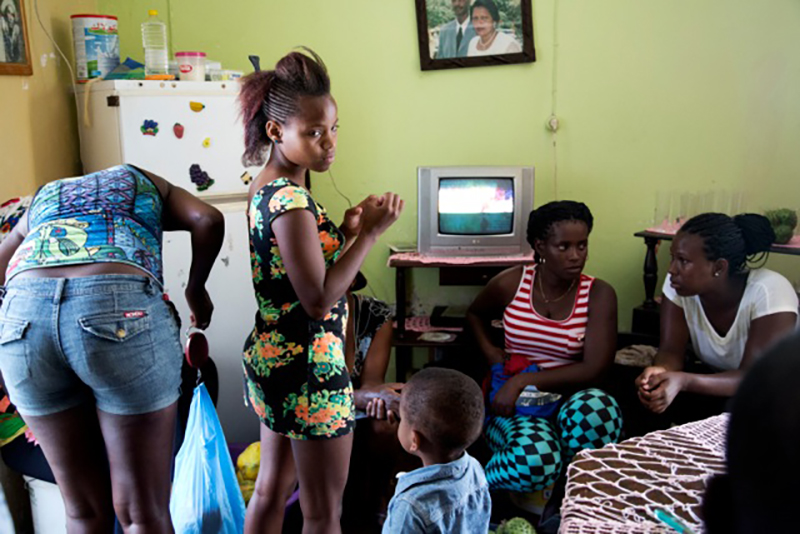 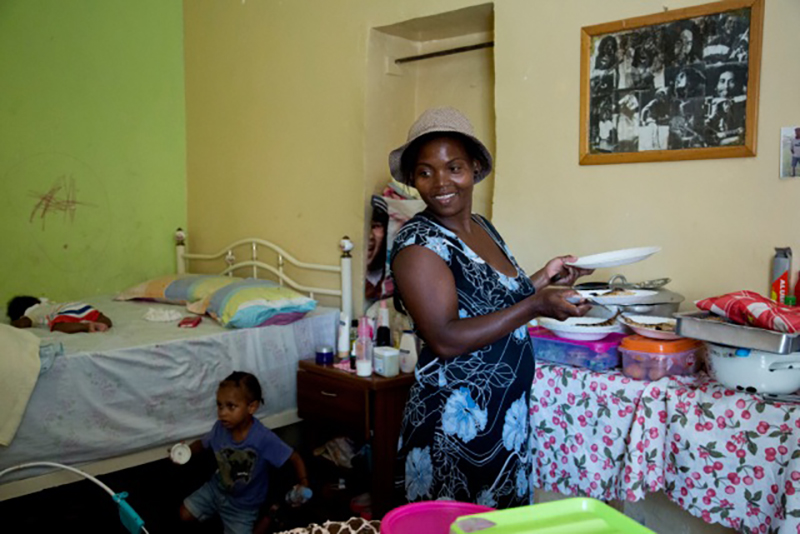 Praia, Brazil neighbourhood. Carmencita, 31, and her baby. Carmencita has lost her husband just ten days ago. “Here in Cape Verde,
us women always had to make it on our own. They told us that we were the weaker sex so much, that we became fighters”. 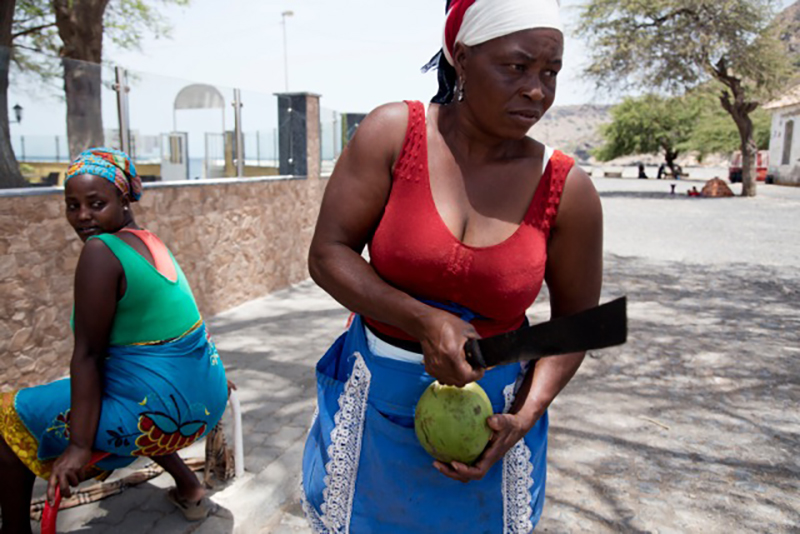 Coconut sellers in Tarrafal, in the northern part of the island. 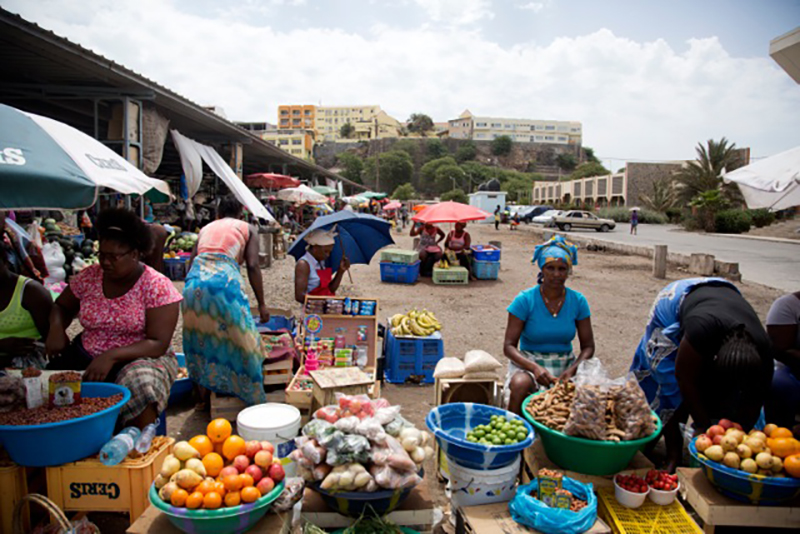 The food market in Praia. 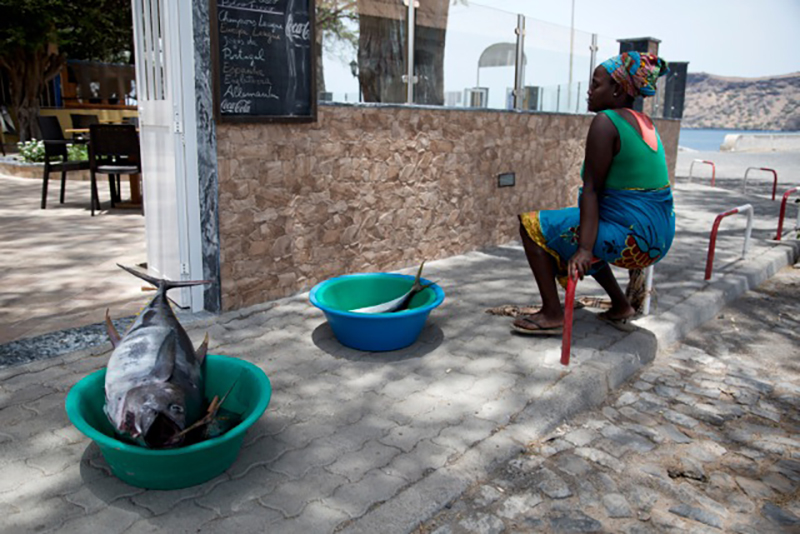 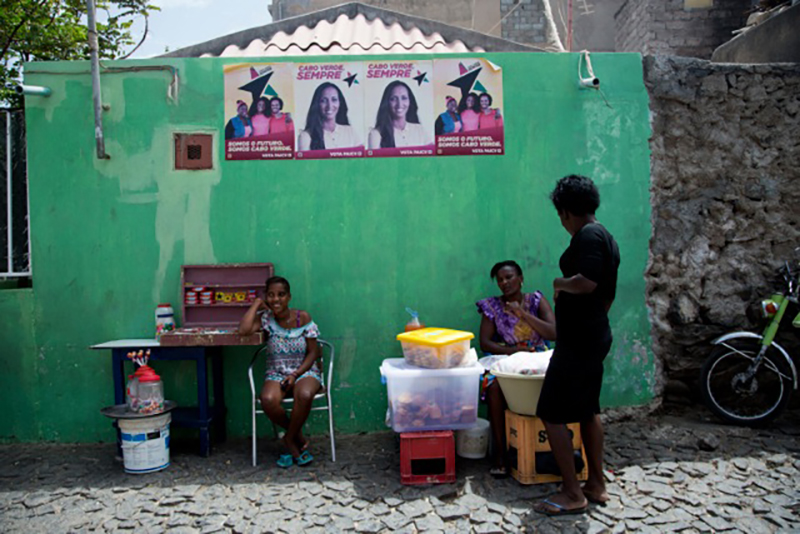 Praia, Brazil neighbourhood. Cristina Fontes Lima, the minister of Sanity, is very confident on equal opportunities. “The country was born from liberation. Equality between men and women was one of our bedrocks from the start”. The government, about to change, is made of a majority of women. “We have focused so much on girls that now we would need a positive discrimination towards boys, to help them not dropping out of school.” 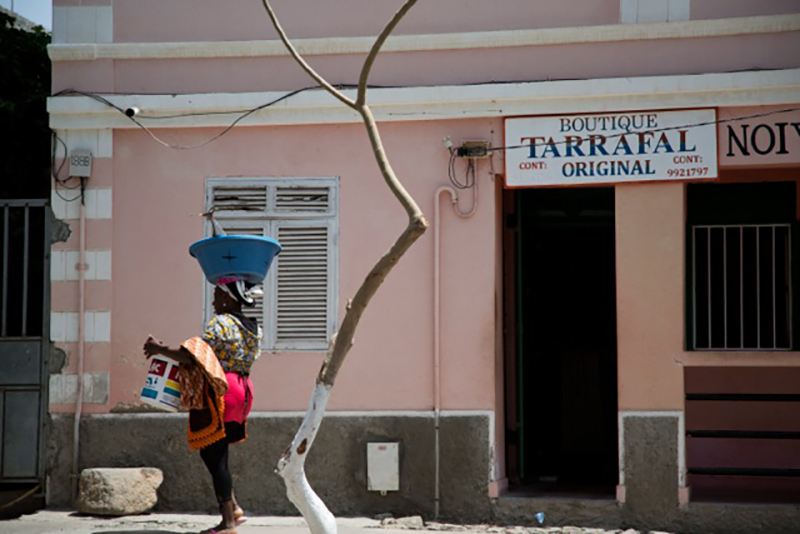 A fish vendor in Tarrafal. 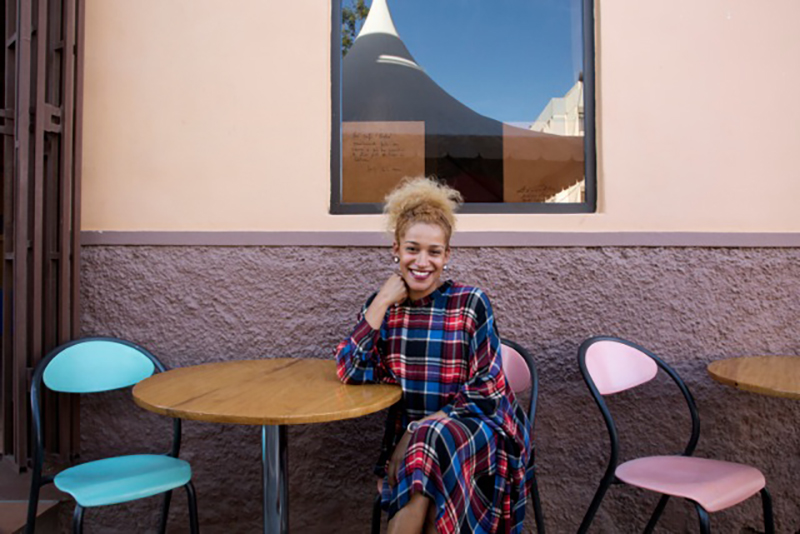 Ceuzany, a local star of 27, never forgot the past of her people. She inherited the gift of music from her grandmother, that taught her to sing languid serenades. “She dreamt of being a singer but never could, because of the political situation. I made her dream mine and I became a singer for her”
says the young woman, that today is able to travel the world, thanks to her songs. 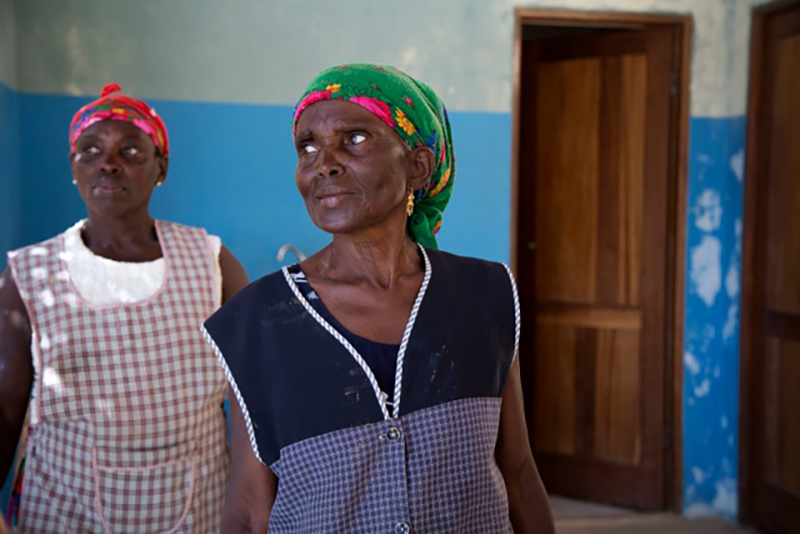 Saturnina is about 80 (she stopped counting), she has 11 children and a hundred years old mother, still alive. She saw her grandmother make the clay go round, ancestral art she was taught from the age of 7. Her great-granddaughter, that works at her sides, is the sixth generation of artisans. “The arrival of plastic has compromised our work: we sell less”. Her long life elixir? Eating cachupa, the local dish made of chickpeas, every morning. 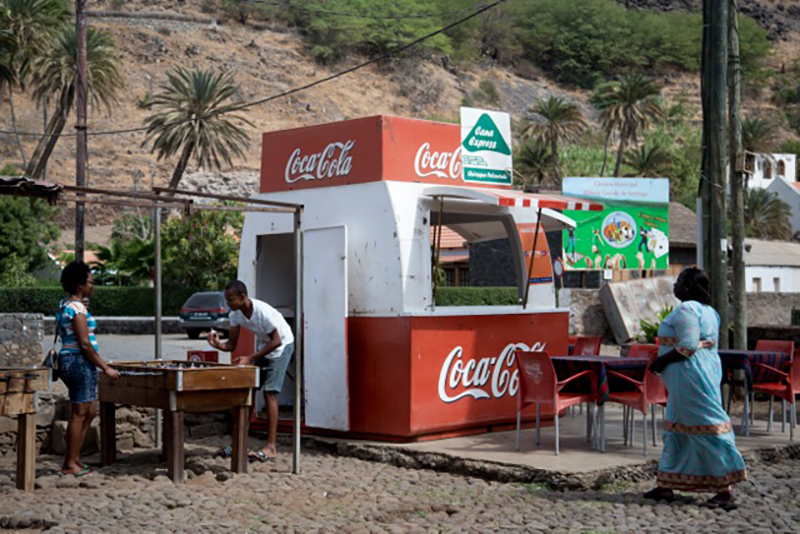 Cidade Velha. Dry lands, lack of rain and absence of natural resources have pushed the majority of Capeverdians to move abroad. Praia. This diaspora, more than 700 000 people, regularly sends money back home to help those who remained. 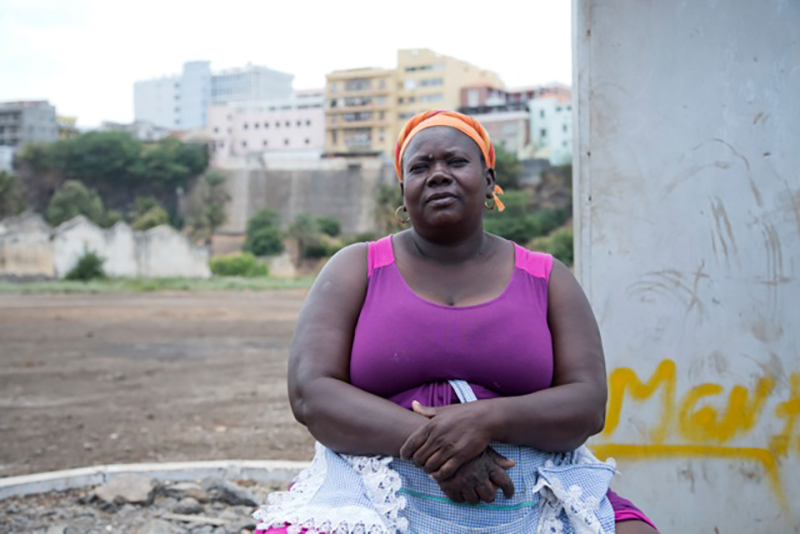 Praia. At the market, Elisa has had the same spot for over 23 years. The spot is often inherited by the mother or one of the aunts. The stands are overcrowded with strawberry and tropical fruits, but because of the dry lands, Cape Verde isn’t able to sustain itself. Elisa’s income depends on the quantity of products she sells, and therefore from the climate. “I have six children, no one has ever helped me”, she says.
When asked if she has a man in her life, she answers with a laughter: “A husband? What for?”. 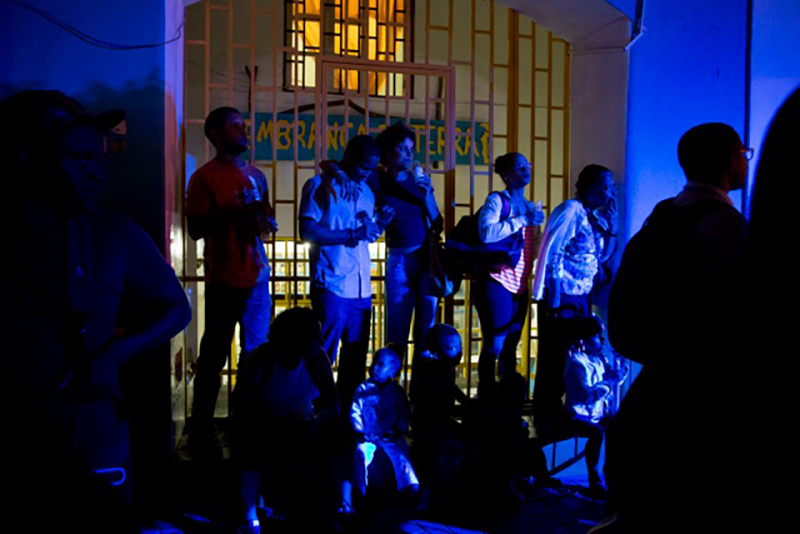 Praia. Public at the Atlantic Music Expo. In the streets the echo of music is constant, it’s she soul of a country that was born more than five centuries ago as a sorting centre for slaves between Africa and America, under the aegis of Portugal. The people have conquered independence in 1975, but music has always been a form of passive resistance. Even when they were slaves, women sang wild rhythms, the “batucadas”, to pluck up courage. Praia. Public at the Atlantic Music Expo. With Césaria Evora as a model, young generations see singing as a way out. The government gives them a push, organizing once a year two festivals, attended by international producers hoping to find a hidden gem: the Atlantic Music Expo
(the biggest musical market on the African continent) and the Kriol Jazz Festival.